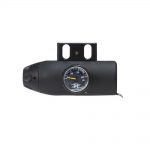 This Empire Relay On/Off ASA Regulator makes it easy to mount a HPA bottle on your Nerf blaster. The lever allows you to switch air supply to the blaster on and off. Used in popular builds like NIRODHA’s Bullpup and Spectre’s ADHD.