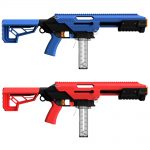 THE JET Blaster CEDA S blaster that is a real powerhouse out of the box. The CEDA S houses the Alpha RT kit for short darts only, and shoots 150 FPS right out of the box. Comes with a Katana magazine and 15 JET Blaster Quick Darts. The blaster has a mil-spec buffer tube that accepts other stocks too. The picatinny rail on the top of the blaster can be used with a wide variety of attachments. The blaster can be taken apart by removing only two pins. Available in Red and Blue.

High power sports blaster: Not a toy. Recommended for ages 14+